"The Z Bag" by Zooby 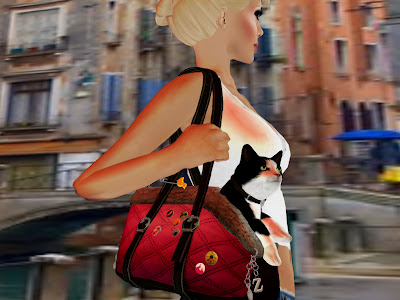 I have long been a fan of Zooby and was thrilled to find the perfect accessory for for all pet lovers. It's called "The Z Bag". There is so much to love about this bag. It's scripted to change colors & textures, add pockets or even add chains, pins, buttons, buckles and a key holder. The cat is animated with sound on and off and animationed as well. The kitty moves it's little kitty paws and head and opens it mouth. You can even make your cat talk in chat. Several cat options are available. And Zooby didn't forget dog lovers. There are puppy Z bags too!Available at http://slurl.com/secondlife/Zoobyland/127/130/21/
Posted by Halllie Larsson at 9:54 PM 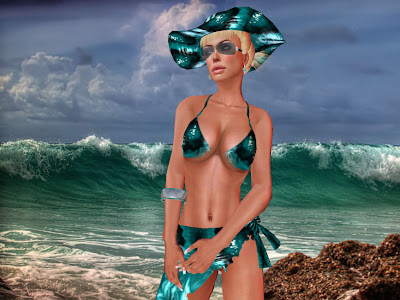 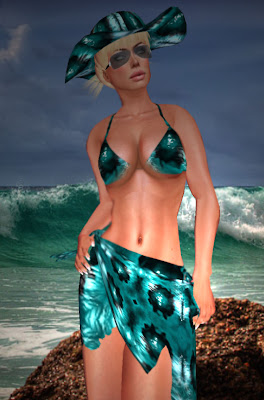 I had so much fun in this outfit from Bewitched Designs by Wiccan Soujourner. This soon to be released pack called Latex Beachwear is shown here in seagreen and the pack is filled with goodies you will want to check out. Shown first is my favorite way of wearing this outfit. I love the side tie. Should you desire more coverage you have options to choose from, even a system Pareo. Can you believe that not only is the hat included, the sunglasses and snorkel are included too! I had planned to show you the cute little seagreen flats as well as flippers that come with this but I played in the ocean a bit too late and got bitten by a shark. Yes, you can actually be bitten by a shark with the water turning blood red! I actually, wasn't that injured but I didn't want to take the chance of the shark ruining my new favorite bikini.
Availale at //slurl.com/secondlife/Bewitched/180/127/22/
And should you be brave enough to swim in the shark infested waters http://slurl.com/secondlife/Pondi%20Beach/87/88/28/ 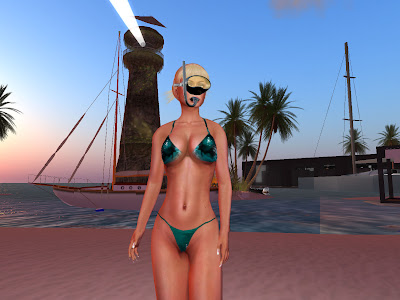 Posted by Halllie Larsson at 6:10 PM 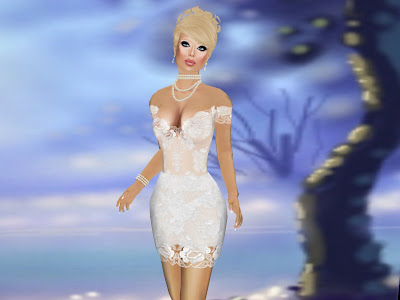 I adore the lace neckline of this dress created by Wiccan Soujourner. The bodice is sheer with just a hint of what lies underneath and the lace at the hem is even more sheer to show a little leg. Although sexy, this is the little white dress you can pull out of your closet for many occasions and always feel appropriate. If you need a new little black dress, Innocent Rose is available in black. By the way, I had to have that too! Available at http://slurl.com/secondlife/Bewitched/175/127/22/

Posted by Halllie Larsson at 8:43 PM 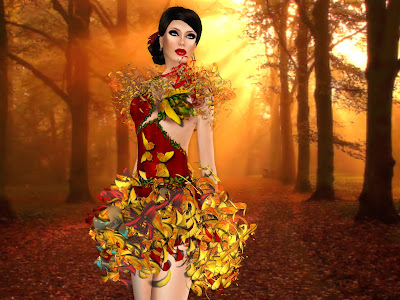 Who said butterflies only appear in the Spring? The splendid colors of red, orange, yellow and gold will have you wearing these butterflies year round. The skirt comes with several options and a delightful headpiece (not shown) is included. You will have to visit the store to check out it's whimsy. The dress is shown here but the floor length gown in also available for purchase. It's time to shed your winter cocoon and emerge to your own splendor! Created by Bliss Beningborough http://slurl.com/secondlife/Bwonderland/121/228/25/
Posted by Halllie Larsson at 5:09 PM

A forbidden apple of a design 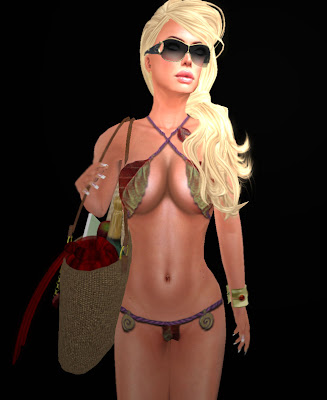 Who wouldn't be tempted by this design that could have come straight out of the Garden of Eden. Although this red leaf bikini is shown here accessorized, as I took the pic for an event submission, this forbidden apple of a design looks fabulously enticing without them, just as Eve herself may have worn it. And should the Eve in you need a change of pace, this bikini also comes in a green leaf design. Created by sarissa Oh of Fallen Angels. Found at Babele Fashion http://slurl.com/secondlife/Constantine/47/14/50/

Posted by Halllie Larsson at 5:18 AM 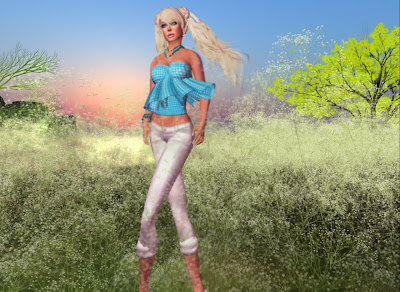 If you can't wait for summer to begin, you will love this little gingham top designed by Honey Szpeizer . This shade of blue is my favorite color but it also comes in red and lime green. The jewelry & pants are also available in her shop. You won't believe the great prices. I bought just about everything in the store and spent less than I would have on one well made gown. It's definitely worth your time to check out her designs. Available at her store delightfully called Honey-Honey. http://slurl.com/secondlife/Moon%20Light%20JP/65/44/24/

Posted by Halllie Larsson at 5:15 PM